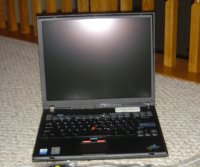 My T41p ([snatched from eBay just a week ago](https://priyadi.net/archives/2004/10/14/won-a-notebook/)) has just arrived. I still won’t be able to play with it until next month, but at least it is now in my wife’s good hands. That’s a major relief to me because there’s always a chance that the deal was a fraud.

The goods reportedly arrived in good condition. However my wife had to pick it up at post office herself because she wan’t aware they were coming when they tried to deliver it a day before. The package was delivered from Stanford, so we suspect somebody there probably get a staff or student discount when getting this. The notebook itself is in excellent condition. It probably has been removed from its packaging once and quickly repackaged again, but there are no evidence that the notebook has been used before. The hard drive was empty. When turning the machine on for the first time, it promptly installed the dreaded Windows XP from its predesktop partition.

When I tried to check its warranty status from [IBM’s web site](http://www.ibm.com), it stated that the warranty will expire at 2007-08-09. So, I can assume the machine was registered at 2004-08-09. Now is only two months after registration date, and probably two months of non-use. I think I can live with that. The one thing missing from the machine was the promised additional 512MB of memory. However, the seller has agreed to deliver it in separate shipment.