Unless you’ve been living under a rock for the last few months, you should know about AGLOCO by now. It is not really different from those [paid to surf](http://en.wikipedia.org/wiki/Paid_to_surf) schemes that were very popular around the late 90s. Their promises are quite simple:

* You sign up, install the ViewBar, and surf the web as usual. The ViewBar will show you ads while you surf the web.
* You earn commission based on how long you spend your time on the web.
* You could convert your earnings into AGLOCO shares.
* You can refer your friends to use AGLOGO, and earn more.

At least, that’s how they are trying to tell us. In reality, they don’t have anything to offer to their users at the moment. 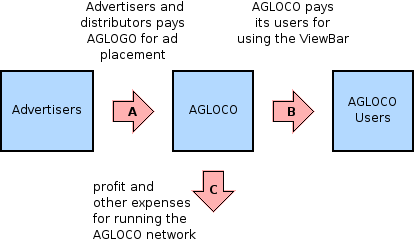 Unwilling to repeat their previous mistakes with [AllAdvantage](http://en.wikipedia.org/wiki/Alladvantage), AGLOCO does not use fixed rate payment scheme. With fixed rate payment, AllAdvantage was in disadvantage (no pun intended) when faced with user abuse. They ended up paying more than they are receiving and quickly exhausted their capital.

AGLOCO introduces the concept of shares. From what I understand, users will earn the amount of money in proportion to the amount AGLOCO is receiving. From the diagram above, A will always be greater than B, users will get a proportion from what AGLOCO get from advertisers. That would mean as long as AGLOGO has sufficient users and advertisers, it should never go bankrupt.

But this would also mean AGLOCO is shifting the burden to its users. When some users are abusing the system, each legitimate user will get less than they are supposed to get. For example let’s say a user is abusing the system by creating several fake users with simulated browsing habits. Without knowing the abuse, AGLOCO will have to pay the abusive user, costing its legitimate users real money.

Unlike AllAdvantage, AGLOCO doesn’t have any real incentive to combat abuse. When an abuse occurs (and it certainly will occur), users will suffer, but never AGLOCO. The only thing missing from AGLOCO as a result of abuse is the accurate number of real active users. AGLOCO needs to present this number to its potential advertiser, but it would be an easy matter for them to simply offset the approximate proportion of abuse, rather than taking serious steps in combating abuse.

Assuming the same rate of income and the same amount of users, AGLOGO users, collectively, will get much less than what they would get from the late AllAdvantage.

AGLOCO will reward a user who gets others join AGLOCO. With the assumption every user surfs the web at least 5 hours a month, the scheme works like this:

* Ignorance. They didn’t pay enough attention to the details, or doesn’t know how to remove any trace of reference.
* Abuse. Puppet users joining under a real AGLOCO user.
* Charity. A user want to donate a part of his share to another user.

Aside from charity purposes, there’s no way a well informed user would willingly join AGLOCO under another AGLOCO user.

If a user has already registered under another user, I would suggest to cancel the membership, remove cookies, and then re-register again.

AGLOCO web site has been very careful not to promise anything. I repeat, they never promise anything, at all. All they do is making these [non promises](http://www.agloco.com/web/guest/shareandcash):

> As AGLOCOâ„¢ grows and the company generates positive cash flow, we will be distributing the excess cash to Members and shareholders of the company.

Nobody, not even AGLOCO itself, knows when that will happen, if ever.

What claimed on other blogs and sites are different matter. Anybody making extravagant claims about AGLOCO being the next big thing is probably just trying to defraud unsuspecting users into joining AGLOCO under their name, and thus getting potential extra revenue at the expense of these users’ potential revenue. Some of them even tell us as far as that each AGLOCO user will make hundreds of dollars every months in average. This is obviously a false claim since AGLOCO itself has never made such claims.

AGLOGO web site has the [Blogs around the world](http://www.agloco.com/web/guest/blogarticle) page where they list several said blogs and web sites. However, again, they are very careful not to make any claim of accuracy regarding these third party sites.

> Please note that blog content changes frequently, therefore we do not endorse these blogs nor can we vouch for the accuracy of the information they contain.

Having said that, I don’t think AGLOCO will be a worthy source of income for its users. Here’s how.

Let’s suppose advertisers pays $100000 for ad placements to AGLOCO. These advertisers will certainly expect they get pretty much the same amount of value from AGLOCO users. If they don’t get a similar value to what they are spending, they will certainly bring their business elsewhere. These values could be in the form of marketing leads or simply brand recognition.

Somehow I doubt that handing people pennies to get them remember and buy their product is a viable marketing model. And let’s not forget that users will only get a fraction from the amount paid by advertisers.

Of course there’s a possibility that a few of these users will get a substantial amount of revenue. In the future, they will post photos of their ‘hard earned’ checks and claim this as a proof that “It works! AGLOCO really works!” Then people with their collective [Valence effect](http://en.wikipedia.org/wiki/Valence_effect) will flock and believe the proof. However, the observant among us will identify that this revenue can only come from the cut imposed on his/her numerous downlines’ revenue.

Because of this, the massive spam it generates, I would suggest staying away from AGLOCO and save your time.