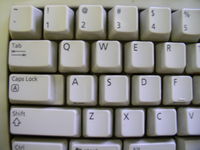 My current keyboard has started acting funny. My Left Shift and Enter keys frequently don’t respond when I hit them. I’ve been pretty disappointed with this [Microsoft Natural Multimedia Keyboard](http://www.microsoft.com/hardware/mouseandkeyboard/productdetails.aspx?pid=019). It worked OK only for first few months. After that, it requires considerable more force to push down the key, writing a lengthy document could tire my fingers easily. I like the older [Microsoft Natural Elite Keyboard](http://www.microsoft.com/hardware/mouseandkeyboard/productdetails.aspx?pid=022) much better. But what I really miss is my old [Logitech](http://www.logitech.com) split keyboard which I can’t remember the exact model.

Why Microsoft and Logitech keyboards? Because I like split models very much, and it is hard to find those nowadays. Even Logitech has discontinued most of its split models, I can only find one model on their web site. Furthermore the only split model is wireless and bundled with a mouse. I don’t like wireless (I don’t feel like replacing batteries after a few months), and I already have a mouse. So, now I’m left with Microsoft again as the only option. There are other vendors like [Belkin](http://www.belkin.com), but I’ve never gotten to see this one yet. If there are no better models, I think I’ll just give up and experiment with non-split keyboards this time.

Anyone dares to recommend me a nice keyboard? :)