This is becoming a cliche. An Linux related article, and an ad showing Microsoft’s latest attempt to distort public opinion. I’m sure there are plenty of other examples, mostly in mainstream technology news sites, but also in sites specializing in Linux news. [Linuxtoday](http://www.linuxtoday.com)’s former owner, Dave Whitinger, for example has warned against visiting Linuxtoday because of the blatant anti-Linux ads. 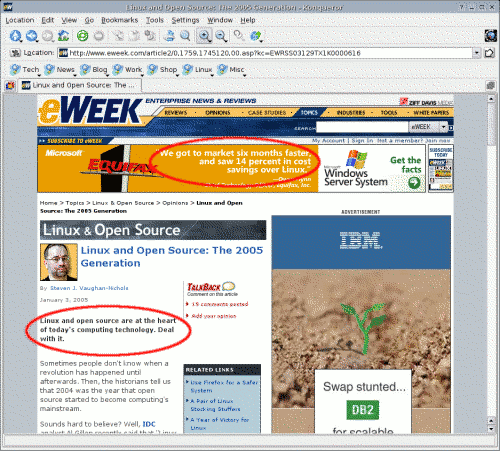 I don’t have problems with all Microsoft’s ad. For example, the obligatory *SomeCompany recommends Microsoft® Windows® XP Professional* line we all see in hardware ads, in my opinion are acceptable. But blatant anti-Linux disinformation, especially in Linux related news sites/magazines is not acceptable.

Linux related news sites and magazines need to draw the line where it is acceptable to display Microsoft ads and still not making readers feels deceived. Displaying blatant disinformation can be seen as willingness to get easy money at the expense of reader loyalty.