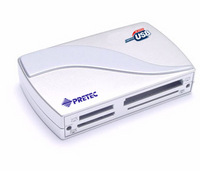 Flash memory cards have become mainstream. Practically digital cameras, PDAs and higher end cellphones all use them. It is the ubiquitous removable media standard in gadgets. However, as the old saying goes: the nice thing about standards is that there are so many to choose from. We have CompactFlash, Secure Digital, MultimediaCard, SmartMedia and more. With so many standards in the market, there emerges the need of multi card readers, or commonly marketed as the n-in-1 card readers.

At first there were 4-in-1 card readers which has four slots for CompactFlash, SecureDigital/MultimediaCard, SmartMedia and MemoryStick. The 4-in-1 name seemed to be clever marketing at that time. It told people that with this reader, it was not required to buy separate reader for each kind of flash memory.

However the marketing people then realized that SecureDigital is different from the MultimediaCard, only both share the same slot. Then to their advantage, they bumped up the number and we had the 5-in-1 card readers. The 5-in-1 readers sold better than its 4-in-1 counterparts, despite the fact that they are the exact same hardware.

Once again, the marketing people realized that there are two different standards of CompactFlash, the CompactFlash I and II. And there is a distinctive kind of card too: the Microdrives, even if it is technically a CompactFlash II card. The only difference is the storage media, Microdrives use metal platters similar to hard drives while traditional CompactFlashes use flash memory. So, they count all of them as separate and we had the 7-in-1 card readers (and 6-in-1 readers for those who didn’t count CompactFlash I & II as separate).

Then the xD Picture Card became standard in Fuji and Olympus cameras. For now they accepted the fact that they need to make engineering changes to accomodate this new type of memory card. Thus the 8-in-1 card readers were born.

OK, now I’ve lost count. What is it? 15-in-1? They even bumped up the number even though to use the smaller MemoryStick Duo, users will need to use a special adapter.

The SecureDigital and MultiMedia Card were also evolving. For SD, the result are the smaller miniSecureDigital (miniSD) and the even smaller microSD which also known as the Sandisk Trans-Flash cards. For MMC, the result are the MultiMediaCard II and the Reduced-Size MultiMedia Card (RS-MMC). Of course they bumped up the number even though the smaller cards will require a special adapter if to be used with card readers.

Now we are at 19-in-1. To make the number even, one manufacturer even counted the Sandisk brand name MemoryStick Pro Ultra II. So, we now have the 20-in-1 card readers.

But, what are the differences between the original 4-in-1 and the current 20-in-1 card readers? Not much, apart from:

Expect more n-in-1 card readers in the future, with n > 20, but without much improvement. I can appreciate manufacturers who bumped up the number one slot after they did an engineering change. However, bumping up the number for something clearly you didn’t do is misleading. The term ‘n-in-1 card reader’ is stupid anyway, it is pure marketing and not informative at all. Is a 10-in-1 card reader really that different from a 15-in-1 card reader? Probably not. Please abandon the term n-in-1 and use the more sane ‘multi card reader’.